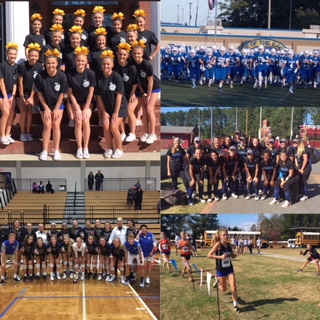 Etowah’s fall sports have boosted the school’s spirit to an even greater level.  Five different teams made it to the state championships, making students and staff on Eagle Mountain proud.

“It’s exciting to see our school have so many different teams that have the opportunity to reach the state championships,” Gabby Melnyk, junior, said.

The school’s softball team had an unbelievable season. After making Etowah history by making it to state, they finished second in the state. An incredible ending to an exhilarating season left the athletes happy with their season and proud of their effort and hard work.

“It was so much fun being a part of the Varsity softball team my first year of high school and being able to get as far as we did this season,” Alaina Smith, freshman, said.

Along with softball, the school’s volleyball team did exceptionally well this season. The athletes’ hard work and dedication paid off. The team ended the season as state runner-up.

“This was my favorite season yet, and I am beyond proud of my team,” Jesse Cohen, senior, said.

Athletes Per Ellingson, senior, and Sydney Runyan, sophomore, represented Etowah’s cross-country team at the state championships. They trained since mid-summer and were given the opportunity to represent Etowah at the state level.

“I’m really excited for the opportunity to go to state and represent our school,” Runyan said.

In addition, the school’s competition cheer team has been practicing since last spring. In late August, they started their competition season. After a long journey and preparing for their state championship competition, they finished in the top 16 in Georgia.

“I am so thankful to attend the state championships for the third year in a row with my fantastic team,” Abby Heath, senior, said.

Lastly, the school’s football team made it to playoffs for the fourth year in a row. The coaches and players practiced for many months to represent the school well.

“Our goal going into the playoffs has been to focus on ourselves. We want to better each of our positions and focus on making ourselves physically and mentally better,” Alexander Pham, senior, said.

Overall, the kick-off to the 2017-18 sports has given Etowah a great outlook to the rest of the year and has gotten everybody pumped for winter and spring sports.