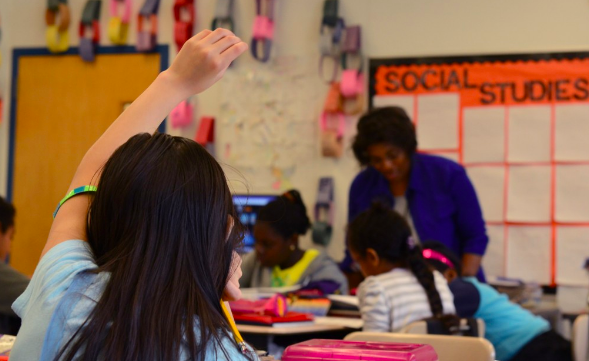 With the universal closure of schools, the ongoing COVID-19 pandemic has halted learning around the world. While many schools have successfully transitioned to a virtual learning environment, a large number of students are having trouble adapting, particularly students in low-income, under-resourced communities.

This points to a much deeper issue, one that was cemented long before the pandemic hit: education inequity.

“There can be no contentment for any of us when there are children, millions of children, who do not receive an education that provides them with dignity and honor and allows them to live their lives to the full,” Nelson Mandela, former president of South Africa, said.

Education inequity centers around a simple concept—resources not being distributed evenly among students, specifically those in communities that tend to be historically disadvantaged or oppressed. Inequities occur when unfair policies, situations, or practices contribute to a lack of results in performance and outcomes among students.

Fairness in the system

Inequity in education is not as complicated as it seems. It goes back to the measure of fairness, achievement, and opportunity in the education system.

“Educational gains in this country have plateaued since 1990, and the gap between white and minority students has proven difficult to close,” Robert Ferguson, lecturer at the Harvard University Kennedy School of Government, said.

COVID-19 has forced thousands of students to learn digitally. Online learning, however, comes with its own set of problems.

From classrooms to computers

The coronavirus has upended almost every aspect of school. With a year passing since the digital learning transition, everything is coming back in full circle.

“[Digital school] is flexible and gives you more time to work on assignments, but for someone who gets distracted easily in a home setting, it becomes more difficult to stay on task and finish assignments in one sitting,” Daniella Villanueva, sophomore, said.

NPQ addressed this issue in April 2020, pointing out areas that made online learning difficult for the students suddenly forced into a world that requires it even more urgently.

“There may be an opportunity to reimagine what schools will look like. It’s always important we continue to think about how to evolve schooling, so the kids get the most out of it,” Miguel Cardona, United States Secretary of Education, said.

The issue of digital access has been prevalent for some time now. According to a 2020 report by civil rights and education groups, nearly 17 million children in 2018 lived in homes without high-speed internet, and more than seven million did not have a computer at home.

Remote learning has also led to a spike in failing grades for certain vulnerable students, including English language learners, students whose first language is not English.

Digital school is not for everyone. The pandemic showed, undoubtedly, that most students learn best in person — in a three-dimensional world, led by a teacher, with constant face-to-face interactions among one another.

“Staring at a screen all day is not optimal. Zoom fatigue is real,” Randi Weingarten, President of the American Federation of Teachers, said.

COVID-19 has reshaped, and is continuing to reshape, education greatly, leaving many to wonder how school will look like for future generations.

How COVID-19 is reshaping education

Schools in America are not done with digital learning. Far from it, in fact.

After a year of many schools adopting a completely virtual environment, it has become evident that digital learning has a place in schools nationwide.

“All the red tape that keeps things away is gone, and people are looking for solutions that in the past, they did not want to see,” Andreas Schleicher, head of education at the Organization for Economic Cooperation and Development, said.

The inequities presented by digital learning, however, demonstrate a long-standing problem that has been going on for many years.

The digital divide has existed long before the pandemic. People who are unable to access the  internet do not have equitable access to education, employment, and other needs, and this has been happening for decades.

“Digital equity is something we all need to be aware of,” Tonya Drake, chancellor of WGU Washington, said.

The future of education

Schleicher believes that the way society is preparing youth for the future of work is all wrong. While people are scared that human jobs will be replaced by robots, school continues to teach kids to think like machines.

“Real change takes place in deep crisis. You will not stop the momentum that will build,” Schleicher says.

Many students say they feel “less motivated” to complete their work on time during digital school, as they believe guidelines are laxer, and they do not feel as compelled to complete the work as compared to their in-person schooling.

“I think that students are unmotivated due to the heavy workload that is placed on us. When I have a lot of work, I feel very burned out and as though I have no time to do things that I actually want to do,” Kate Conner, sophomore, said.

School today is a product of history, not of research on how students learn. This furthers the question: what needs be changed about modern schooling?

In the past century, history has transformed significantly—from inventions such as the first mobile cellphone to electric cars. Yet, school has remained relatively the same.

Students continue to sit in a classroom every weekday for hours on end, learning about subjects that, in many cases, do not pertain to their future aspirations. Many are under the constant pressure of obtaining the highest grades, doing well on standardized tests, balancing extra activities, all while encompassing conventional teenage activities.

“The feeling of being in a constant competition for success and appraisal has garnered immense pressure on students to feel obligated to endure the most rigorous classes. This, compounded with impending factors such as class rank, advanced placement exams, and standardized testing anxiety, has left little room for creative competition and exploration of our vital interests,” Katie Brenneman, sophomore, said.

While schools are intended to expand creative horizons, they have conversely become factories that are producing children who believe the only way to achieve success is by graduating college and being in a stable job, exacerbating both mental health issues and flawed ideologies of success in students.

“Youth have fresh ideas. While teachers complain that students are spending an awful lot of time on social networking, they forget to mention that it’s the only way we, the students, can have our voice heard,” Line Dalile, student activist and writer, wrote in the Huffington Post.

Most classes in schools are perceived by several to be rigid—students are required to take a specific set of core classes with structured curriculum and standards. Hence, students are placed in an environment where their creative expression is stifled, rather than cultivated. In this, the modern schooling system is said to diminish students’ creativity.

“Creativity isn’t a test to take, a skill to learn, or a program to develop. Creativity is seeing things in new ways, breaking barriers that stood in front of you for some time. Its essence is in its freshness and the ability to make dreams come to life,” Dalile said.

The ubiquitous cycle of sitting still in classrooms, memorizing information just to regurgitate it for tests instead of truly absorbing it, and attaining a steady job to fit the quintessential mold of success has existed for years. However, those who dared to challenge the status quo, like Albert Einstein, the Wright brothers, and Walt Disney, have altered the course of history.

Education is more than simply memorizing vocabulary terms and scoring well on tests. It is about nurturing creativity, encouraging passion, and fueling curiosity in students. While the world continues to evolve, the education system has remained stagnant, making it all the more important to reform the system.