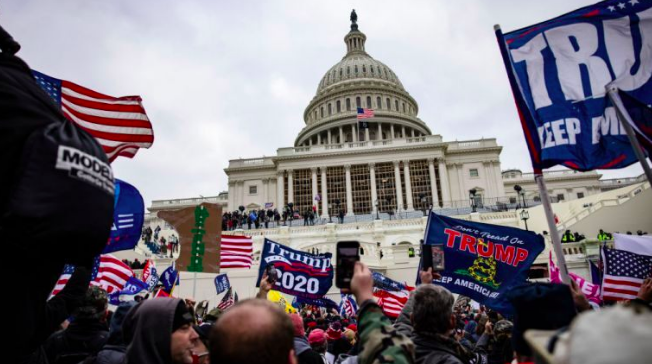 On the afternoon of Jan. 6, 2021, as Congress affirmed President-Elect Joe Biden’s presidential victory, hundreds of pro-Trump supporters assaulted the US capitol. Within the mob, at least four people died including one woman who was shot by the U.S. Capitol Police, and more than 50 arrests were linked to the riot. The day proved to be like no other modern American historical event—the last time the Capitol was stormed was during the War of 1812.

The scene provoked a mix of reactions at Etowah, with many students and teachers discussing the recent events unraveling in D.C.

“I feel that the Trump-supporting people attending this riot were domestic terrorists and should be prosecuted accordingly… [I believe] it will force the US to finally open its eyes to the joke it has become on the international stage, and that it must change and drop Trump to be respected by any other country from here on out,” Ryan Kennedy, junior, said.

In contrast, many believe that President Trump is not to blame for the events that transpired at the Capitol.

“While I will admit that Trump supporters should not have done what they did, people are taking this way out of proportion. This is not our president’s fault (…) people have become naive enough to believe anything they hear without looking into the facts first,” Madison Kutschke, sophomore, said.

Several students emphasized that there was unequal treatment by the police between the rioters and those protesting during the Black Lives Matter movement.

“The riots that took place in the capitol building showed not only how angry people can get when things don’t go their way, but the systematic racism in America. When black lives were being peacefully protested, the response was violent, yet when white nationalists created a riot in the capitol building, they had no repercussions. I feel outraged (…) things need to change, and it needs to happen soon,” Rachel Anderson, junior, said.

The violent scene brought a sudden halt to the certification of Biden’s victory. Hours after law enforcement officials cleared the rioters from the Capitol, lawmakers returned to work. Vice President Mike Pence certified Biden’s win in the middle of the night, capping off a historic joint Congressional session. Georgia Republican Senator Kelly Loeffler stated she could no longer object the election results “in good conscience” following the chaos at the Capitol.

“The violence, the lawlessness and siege of the halls of Congress are abhorrent and stand as a direct attack on the very institution my objection was intended to protect,” Loeffler stated in response to the siege.

Since the riot, questions have been mounting over the security failure at the Capitol. Social media videos showed sparse police lines quickly overwhelmed by crowds, some of whom were wearing armor, brandishing weapons, and spraying chemical agents. On Thursday, Jan. 7, the chief of the US Capitol Police confirmed more than 50 law enforcement officers had been injured.

“The violent attack on the US Capitol was unlike any I have ever experienced in my 30 years in law enforcement here in Washington D.C.,” Chief Steven Sund said.

Chief Sund announced his resignation effective Jan. 16, a decision that came after Nancy Pelosi, Democratic Speaker of the House, publicly called on him to step down over the department’s handling of the violent pro-Trump siege of the Capitol.

Following the siege, Twitter has permanently banned President Trump’s account. The company blocked him for blasting out a series of falsehoods as rioters stormed the U.S. Capitol. The President was also banned as a user from Facebook until the end of his term.

Major cities across the nation are strengthening their security after threats of armed protests at state capitols before the inauguration of President-Elect Biden next week. With many still reeling from the recent events, the storming of Capitol Hill has undoubtedly gone down as an unforgettable moment in history.